A cable, or wire rope, is a rope made of several strands of metal wire, twisted together.

Wire rope was invented in the 1830s by a German miner and used for hauling and hoisting things in the mine.  The Germans quickly realized that this wire rope was much stronger than traditional hemp rope.  This first version was made out of iron, but wire rope is today typically made out of steel. 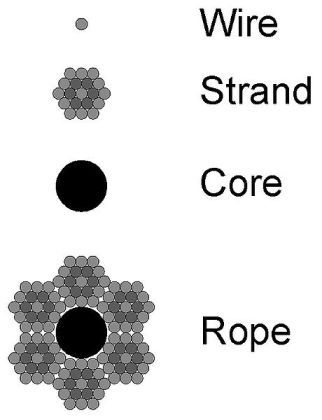 A basic wire rope is made by winding several wires together to make a strand and then wrapping six strands around an inner core to create the final cable.  The strands can be twisted in either the opposite or same direction as the wires that make up a strand.

Software developer in the Twin Cities area, passionate about software development and sailing.
View all posts by Sean →
This entry was posted in Technology and tagged Cable, Strand, Technology, Wire Rope. Bookmark the permalink.