Nāgercoil is a city at the southernmost tip of India whose name means “snake temple”, deriving from “Nagaraja”, which is Sanskrit for “king of snakes”.  Nagaraja is apparently a five-headed serpent deity.  Or possibly it’s the thousand-headed snake upon which Lord Vishnu rests.  It’s a little unclear, since Britannica doesn’t elaborate and sources on the web point in a number of directions. 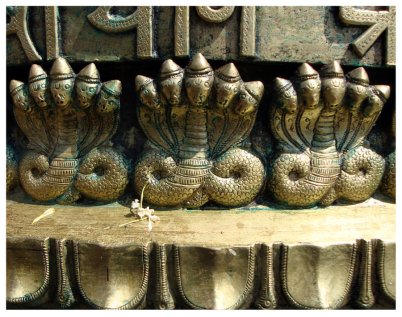 One thing is certain.  Worshipping a five-headed snake god is wicked cool and a story worthy of inclusion in a Harry Potter novel.  I wonder if the residents of Nāgercoil know about Parseltongue.

Software developer in the Twin Cities area, passionate about software development and sailing.
View all posts by Sean →
This entry was posted in Places and tagged Nagaraja, Parseltongue, Places, Snake God. Bookmark the permalink.